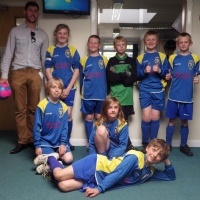 Northbourne took part in a football tournament at Warden House on Tuesday 20 May.

Our football team joined in with a football tournament this week.

Northbourne worked hard and made it to the semi finals and went up against Kingsdown.

The game was decided by a penalty shoot out and unfortunately we didnt make it through to the final.  We played well, put in a superb amount of effort and are very proud of ourselves.

The Federation of The Downs and Northbourne is committed to safeguarding and promoting the welfare of children and young people and we expect all Governors, staff, volunteers, parents and carers to share this commitment.